The LADDER Project is coming to an end and it is time to draw the conclusions of this three-year project. One of the richest dimension of the project was the Capacity Building and Peer-to-Peer learning component, which gave birth to a number of activities increasing the DEAR (Development Education and Awareness Raising) skills of all the consortium and beyond. 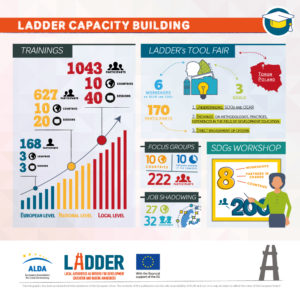 The first activities implemented were the EU level trainings held in Croatia, Ireland and Greece in 2016. Following these three major events, through a cascade mechanism, the local authorities (LAs) and association of local authorities (ALAs) of the consortium reproduced in their respective countries two trainings at the national level and four at the local level (follow the links for further information on the national and local trainings). Thanks to this innovative approach the outreach of these actions was extremely high: more than 1000 representatives from LAs, ALAs and Civil Society Organisations (CSOs) had the opportunity to strengthen their skills in the field of Development Education and the Sustainable Development Goals (SDGs). A selection of the most active participants of the trainings had then the opportunity to participate in a Focus Group, which aimed at deepening the topics discussed during the trainings. These sessions focused on approaches, methodologies, and tools that are used or can be developed at national and local levels. Participants thus had the opportunity to draw an accurate picture of the perception of development education at national level in the countries involved.

On the same trend, in 2017 eight “SDGs workshops” were implemented within the same countries. The workshops aimed at increasing the knowledge of citizens about the Sustainable Development Goals and fostering their process of becoming active citizens. High level experts around Europe contribute to make these seminars relevant and achieved great results (have a closer look at the workshops in Bulgaria and Poland as well as in Ireland).

Additionally, to this, the LADDER Project has also promoted and implemented several Job Shadowing activities designed to exchange best practices and experiences during a four-day peer-to-peer exchange hosted by the co-applicants of the consortium. Many actions were implemented in the framework of this action. Mentioning just some of the activities, the partners during the meeting had the opportunity to participate in the “WEAR Project” workshop on Women’s Health and Global Development, where women discussed health and how gender inequality impacts on women’s health; to visit two primary schools (Hristo Botev and Ivan Vazov), where Roma pupils constitute a majority and meet the school directors to talk about projects implemented for greater inclusion of Roma pupils and their parents in local community life; and the participation in a conference on global education organised by CONCORD, followed by an internal meeting gathering DEAR actors from Europe, which allowed the participants to get a first-hand experience of Pan-European coordination and future actions related to DEAR at the European level. Want to know more? Have a look at the news items published on the LADDER website: Job Shadowing in France, Georgia,  – Denmark-Belgium-Italy,  – Slovenia – Croatia – Belgium, more exchanges in 2017 and lastly Bulgaria and the Netherlands.

Finally, May 2017 was marked by a major event gathering more than 170 participants, namely the LADDER Tool Fair which was held in Torun (Poland). This event was extremely valuable and provided the participants with the opportunity to exchange and showcase best practices in six different workshops. The implemented workshops provided rich debates on best practices about global citizenship in the formal and non-formal education sector; the empowerment of citizens and the creation of an enabling environment; the opportunity to reach out to citizens through the Local Democracy Agencies; the increase of ownership of SDGs through research findings on development education; and lastly the experiences of the LAs of the LADDER consortium in reaching out to citizens.

The impact of these actions was extremely positive and participants were highly satisfied. They mentioned that, thanks to this, they have learnt more about the development education field and that these activities have allowed them to successfully affect the DEAR policies or actions of their organisations. Step by step, LADDER has contributed to change LAs, CSOs and citizens’ daily attitude, stick around to hear more about the achievements and results of the project!