The LADDER project is coming to an end and it is time to draw the conclusions of this three-year innovative project. The fifth dimension of the project is the Creative Component, a theatre play performed in several European countries which aims at raise citizens awareness throughout the the universal language of art.

For this dimension, Mr. Francesco Zarzana, art director of LADDER’s cultural partner Progettarte, has written the play “In a better world”. The plot is based on the topic of human rights and tolerance giving a hopeful perspective on the migration crisis. It tells the true story of a young refugee woman crossing the sea hoping to have a better life in Europe. On the tragic journey she loses her partner but saves two children, whom she brings to Europe where they can have a more peaceful future. 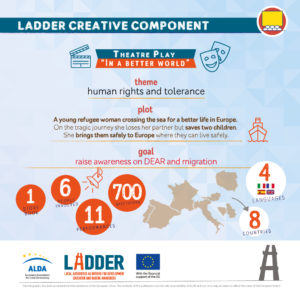 The international cast performed this play in 11 cities in 8 European countries and rose awareness on migration and DEAR (Development Education Awareness Raising) among the more than 700 spectators. The play was translated into four languages: Italian, English, French and Spanish. It also integrates poem, chant and music to spread its message via different artistic channels. On its tour through Europe, the play has entertained, emotionally touched, risen awareness and made people reflect on this human tragedy. Discover more about some of the performances:

Additionally, a storybook has been published with details of the 11 performances, feedback from the actors and explanations from the art director. To discover “In a better world” in its integrity access the full online version of the storybook.

For an overview of the four other LADDER dimensions and the general achievements have a look at following articles: Research, Capacity Building, Advocacy, Grassroots Actions!