The LADDER project is coming to an end and it is time to draw the conclusions of this three-year innovative project. Part of the project’s most successful initiatives were the grassroots action and citizens involvement. Through the three major initiatives below awareness was risen locally and citizens got actively engaged.

The Pan-European slogan competition was launched in 2015 and targeted youngsters. Pupils from various countries were given the opportunity to have their say on development topics and express it through art. 773 Slogans were submitted coming from 293 schools in 17 countries. Five winners have been chosen from all the videos, drawings and posters which had been handed in. 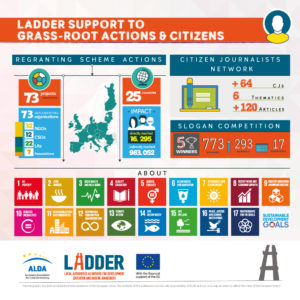 The second initiative launched by this dimension was the Citizen Journalists one that engaged young people in writing about matters related to the Sustainable Development Goals (SDGs) and local initiatives. The network was launched in 2016 and involved young non-professional journalists and ordinary citizens coming from all partner countries of the project. Their articles were published on the LADDER website under six categories: poverty & development, climate & energy, tolerance & inclusion, citizens’ participation, engagement of public & private sector, local actions for global impact. In total the network brought together over 64 Citizen Journalists who wrote more than 120 articles. The 18 most dedicated among them got the opportunity to participate in a three-day training on journalism and social media in Strasbourg (France).

Finally, the grass-roots component of the project developed a Re-granting Scheme action which exceeded all expectations! The goal of this initiative was to support local and grassroots organizations and institutions by developing local projects addressing core issues related to development education and the SDGs. In 2016 and 2017 call for proposals gathered a multitude of propositions and in the end LADDER supported 73 micro-projects in 25 different countries. Almost 1.000.000 people have been indirectly reached by this initiative which demonstrate to have a great impact. Supporting so many projects allow LADDER to promote different SDGs and their localisation. For instance, the project “Migrant Woman Among Us” by the Czech organisation SIMI focused on migrant women in the Czech Republic. Another example is the Latvian project “Water – the beginning, the existence and continuation.” implemented by Rucava County Council. Its aim was to protect the local Baltic Sea area and to raise awareness on environment pollution. A handbook with all 73 projects will be published to share these successful stories.

LADDER sub-granted each of the local organisations to back them in the implementation of their micro-project. The outstanding result is far reaching. Stay tuned to learn more about the overall accomplishments of the fifth dimension of the project: the cultural component.