Home/Andreas Canvin, Citizen Journalist - Poverty & Development/“She was jumping of happiness” – working in a refugee camp by Catarina Cerqueira
Previous Next 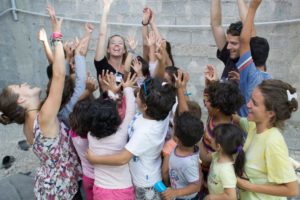 Sometimes, it’s the small things that make you the most happy. Just ask Catarina.

In the summer of 16′, Portugese Catarina Cerqueira volunteered in the ELEONAS refugee camp in Athens, Greece. Here, she worked as a volunteer for the Elea Project, which helps improving the living conditions for the refugees and migrants living in the ELEONAS refugee camp. For two weeks, Catarina worked togehter with other international volunteers in order to create worthy conditions for the people living in the camp.
I spoke to Catarina about her experience and what she thinks of the whole refugee situation:

First and foremost, please introduce yourself:

My name is Catarina and I’m from Portugal. I’m a twenty-year-old student of Political Science and International Relations.

How & when did get the idea of volunteering in a refugee camp?

The idea of volunteering in a refugee camp came when I started hearing about the growing influx of refugees crossing the Mediterranean, around September 2014, when big disasters happening at the sea started appearing in the news.

Since childhood, I have always thought to myself how unfair it is that the place where we are born determines the course of our life, so I’ve always been very touched and sympathetic with the refugee’s situation.

In July 2016 me and a friend that had the same feelings about this situation, decided that we couldn’t wait any longer, we really needed to do something. After 3 weeks we were flying to Athens.

What was your experience working with refugees?

I worked for 2 weeks in the Eleonas Refugee Camp with a project named Project Elea, organized and run only by volunteers. In this governmental camp (one of the first in Greece) there were living around 2500 people.  Their basic needs in terms of security, housing, food and medical attention are provided by the Greek authorities and NGOs, but there’s other important needs that the volunteers cover such as food distribution, clothing distribution, infrastructure improvements, sport activities, skill-sharing workshops, playground & activities for children, among other things.

I tried to be involved in a bit of everything, especially in the food and clothing distribution. And of course the most pleasant thing to do was spending some time playing with these amazing children that don’t have much and still give you the biggest smiles in the world.

The article continues below the pictures 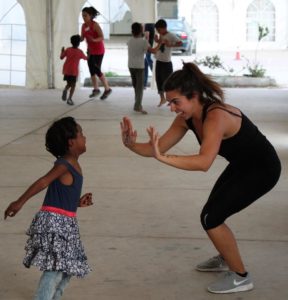 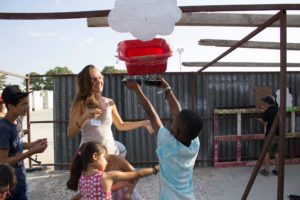 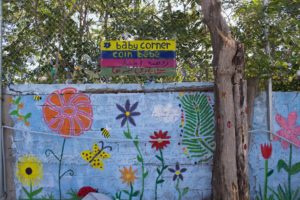 Is there one experience from your work that really stands out?

There were many moments in the refugee camp that marked me for life. Many sad stories but most of all many smiles. One of the best experiences I had was when I worked in the clothing distribution. In August it was around 40ºc in Athens and a woman was asking me for some trousers.

Because of the language barrier and the fact that the clothes people sent to the camps are not really appropriate for its conditions (it’s mostly what people don’t want anymore and not what the refugees need), it was being a really difficult task. After showing her around 20 pairs I finally found some red, light, fresh, and comfortable trousers. She was jumping of happiness and had the biggest smile on her face.

After working with these people, how do you respond to the wave of negative rhetoric towards refugees?

As an activist for Amnesty International I was already campaigning for refugee’s rights before having this experience by participating in protests, talking about it in schools, etc. etc. I think that after this experience what changed was that now I have real facts that I can use against this negative rhetoric. At the same time I feel much more frustrated now when I hear really negative and mean commentaries about refugees.

Why do you think refugees has become such a sensitive and polarizing topic?

I think Europe is going through a bad moment and in bad moments people always need someone to blame. Also, the fear that people have is mainly caused by the way media present the situation which is something that instead of promoting a comprehensive understanding of the situation only generates fear, by focusing on negative (and often false) particular cases instead of showing the true situation:  entire families, like ours, fleeing in search of a place where they can survive and provide their children a better future.

On the other hand, the people who are aware of the situation are very active and committed in helping this people.

Are we, in your view, doing enough to solve the refugee crisis?

I don’t think we are. We are not even fulfilling our international duties. Plus, we are violating them as the agreement with Turkey showed.

What can we as individual, European citizens do in order to help solve this?

First of all we need to make sure people have a real understanding of what’s going on. Going to schools, organizing debates, pressure media to do a better job.

Then everybody can try to provide help: donations to organizations on the ground, volunteering, etc. And we definitely need to pressure our governments to fulfill their responsibilities. We need to think of countries like Lebanon or Jordanian that, with far less resources, are receiving much more refugees than the European countries. 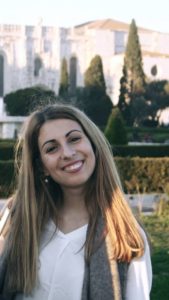 This is Catarina Cerquiera. Since volunteers were not allowed to take pictures from inside the camp, the pictures of this article have been selected from Project Elea’s Facebook-page: https://www.facebook.com/projectelea.volunteers/?fref=ts

The refugee crisis is relevant for a number of the #GlobalGoals, ranging from #1 – Ending poverty to #16 – Peace, justice and strong instiutions. Refugees are rarely enjoying proper nutrition, housing etc., which is a problem we need to act on in order to fulfill our Global Goals for 2030. In this regard, Catarina is leading by example.

Many thanks to Catarina Cerquiera for sharing her views and experiences. You can learn much more about Project Elea right here: https://www.facebook.com/projectelea.volunteers/?fref=ts

Read the article on Globale Stemmer.