Migration experts from different countries met mid-November in Istanbul (Turkey) within the framework of the project “Ladder—Local Authorities as Drivers for Development Education and Raising Awareness”. The conference, titled “From Local to Global: Migration’s Challenge with Civilization” indeed focused on the massive migrant influx due to the Syrian crisis. The event, hosted by Marmara Municipalities Union in cooperation with SOS Malta, aimed to share policies and practices at the local, national and regional level. A photograph exhibition from Mustafa Kocakoç, run in parallel, gave a valuable visual input to the topic. 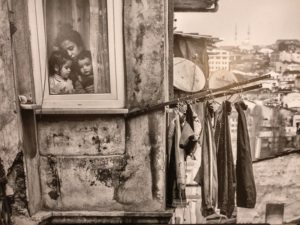 During the opening speeches, Dr M. Cemil Arslan (MMU) drew attention to the Turkish refugee policy, one of the most advanced, while Irene Zanetti (ALDA) stressed the importance of grass roots actions— “Change starts locally”. In the first session, representatives of Turkish municipalities contributed by illustrating the growing role of local governments in social cohesion of urban refugees. In Turkey, 93% of the 3.3 million Syrian refugees don’t live in camps but in towns and cities. The country, which has been hosting the highest number of refugees in the world since 2014, developed an effective integration policy based on human rights and social justice. Humanitarian aid, health services, housing, education and employment constitute the main axes. Moreover, bringing local communities and refugees together is undeniably a core element. The authorities also put a lot of effort to eliminate the risk of a lost generation offering formal and informal education to the youths (59% of the refugees are aged between 0 and 14). Language is another vital component of social harmony hence the importance of providing accurate translation services.

In the second session, representatives of Turkish CSOs and central administrations discussed on the management of migration flows, more specifically about reception and integration in the country. Selçuk Şatana detailed the language services offered as well as the Law on Foreigners and International Protection. He introduced the different legal and administrative status and the Non-Refoulement Principle. Elif Selen Ay went through UNHCR’s primary activities in Turkey such as protection, refugee status determination and camps coordination/administration. On this last subject, life within camps were described by Izzet Şahin (IHH Humanitarian Relief Foundation) and H. Alp Kaya

(AFAD Disaster and Emergency Management Presidency). Besides tent and containerised camps, hard-wall villages have also been built in a remarkable way. The other highlights were the treatment of amputees sadly numbering 2.8 million and rehabilitation projects for children and women in Istanbul such as Broken Minds or Smiling Faces.

For the last session, speakers from different countries shared their experience. Dr Nasser Yassin, from the American University of Beirut, explained the situation of Syrian refugees in Lebanon focusing on the efficiency of informal programs such as accelerated learning, remedial classes, literacy and numeracy, recreational activities or Syrian curriculum. Lorna Muscat (SOS Malta) portrayed the current situation on the Mediterranean island and set forth the Ladder Migration Path. Mr Tamer Kiliç (International Centre for Migration Policy Development) showed how Western Balkans have been historically a transit region between Asia, Middle East and Europe. Mr Mohammed Fares, a Syrian astronaut who fled with his family to Turkey , concluded the conference with a poignant testimony.

He emphasized on the good that refugees were able to offer to welcoming countries switching from a numeric to a human perspective. He retold how, during a space mission, he reflected on borders we have drawn between us. From up above he didn’t see only Syria but the World as one. A subtle reminder that Earth is our common Mother …