Wefood: A simple, tasteful solution to a big, distasteful problem

Wefood: A simple, tasteful solution to a big, distasteful problem 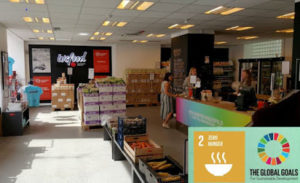 …that Danes waste 700.000 tons of food each year? That’s 65 kg. per person. And that’s a problem. According to the UN’s second Global Goal, foodwaste should be reduced by 50% globally by 2030. That’s ambitious. But with initiatives like the Danish concept of Wefood, reducing foodwaste might be much easier than we think.

Located in central Copenhagen, Denmark, the Wefood-store on Amagerbrogade couldn’t have been placed in a better spot. Tens of thousands of people pass here every day, and it’s located just besides a number of supermarkets. And supermarkets are vital to the concept of Wefood. It’s incredibly simple:

Local foodstores, supermarkets and restaurants donate their surplus food, which would have ended up in the trash anyway, to the Wefood store –> Wefood then sells the surplus food with at least a 50% discount –> all profit from the sale of food then goes to the humanitarian organisation Danish Church Aid (Folkekirkens Nødhjælp in Danish), which use the money for their projects around the world.

Not only simple and effective in reducing foodwaste, the Wefood concept also has economic benefits. Each year Danes waste a total of 1.9 billion euros in buying food that’ll end up in the trashcan. Moreover, the Wefood concepts also helps poor families, the homeless and other vulnerable members of society by selling food with significant discounts.

The Wefood concept is based around volunteering. This keeps the costs of running the store to a minimum. One the volunteers is 25-year old Gitte. Gitte has been a volunteer for a three-month period, and she’s positive about the concept:

“I’ve only had positive experiences volunteering in the store. People have been incredibly supportive of the initiative. In the first weeks of our opening, we had over 10.000 customers, which have generated a lot of attention. And money for a good cause (Danish Church Aid) too”.

The popularity of the Wefood-concept is noticeable and Danish Church Aid are already planning on opening a store in Aarhus, Denmark, in the autumn of 2017.

Because food should be eaten, not wasted. Especially with 800 million people starving.