Started in the 1960s after the Independence, building development has transformed the Mediterranean island of Malta into a permanent building site full of concrete blocks. Known for its unique architectural mix of narrow streets and historical buildings from different eras, the tiny country, one of the smallest and most densely populated in the world, seems to take the path of over-development, in particular high-rise construction.  As a matter of fact, this does not really match with the Maltese landscape. 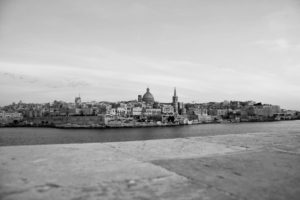 Malta, a Mediterranean gem in danger.

Construction has been spreading everywhere, from rural zones to touristic areas where high-rise development is now legally possible due to an interpretation of the Urban Conservation Areas policy which is quite perplexing. As evidence, the Planning Authority has proposed in 2016 a master plan for around 20 towers in Paceville, a nightlife district that did not exist at all until the 1970s. Some controversial projects already got the green-light and started raising in the wake environmental and quality of life issues.

One can quickly observe the existing infrastructure that cannot handle the extra-load generated by giant buildings.  Targeted areas are already affected by recurring overflowing sewage. Roads, sewerage and energy systems will be accordingly upgraded or redeveloped for the profit of the developers who seem to win hands down facing the community’s needs.

For the Townsquare project in Sliema, which is the main coastal resort, 37 trucks will exit each day during the 10-month excavation phase (one every 20 minutes).  These vehicles will be cleaned as they exit and surfaces wet as well.  The last straw for this nation whose resources are among the scarcest in the world. Indeed, under 2,000 cubic metres per capita a year, a country is considered by EU to have very low water resources (the island has only 58 cubic metres!). 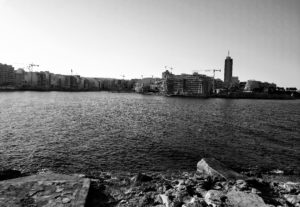 Saint Julian’s, one of the main areas concerned by high-rise development.

The project’s environmental impact assessment also said residents have been advised to keep windows shut to minimize noise during the preliminary works. A level around 96 decibels, which is superior to the danger point, has been confirmed by the authorities. To crown it all, a “potential collapse of excavation” has been highlighted in a geological survey.

The air quality forecast is not more optimistic. Traffic congestion reaching an unprecedented peak, the additional daily 6,000 cars expected to pass through the area hints at serious health concerns. A World Health Organization study showed last year pollution levels which were breaching limits (14 micrograms fine particulate matter per cubic meter on average, while recommended limit is 10 micrograms). In fact, Malta has the highest asthma rate in Europe. The traffic boom would not help for sure to decrease it.

Land reclamation constitutes another concern, especially when adjacent to the sea such as in the Portomaso development. This project, located in Saint Julian’s (another tourist hub), is based on an artificial lagoon surrounded by 46 bungalows. What implies the reclamation of 125,000 sqm of the seabed in an area close to a Marine Special Area of Conservation. The seagrass in that zone has been recognized as a priority habitat by EU. Not to mention the presence of the Noble Pen Shell, an endemic species to the Mediterranean. 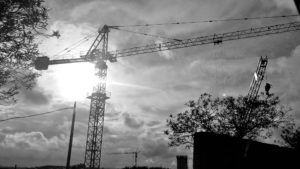 Many are aware of the environmental and social damage of these projects, which are clearly not sustainable in the long run. That is why NGOs, residents’ associations and even local councils joined their forces in an attempt to fight the greed of the developers, notably through appeals of the approvals delivered by the Planning Authority. Let’s hope that kind of mobilization will bear fruits to protect the true gem that is Malta …