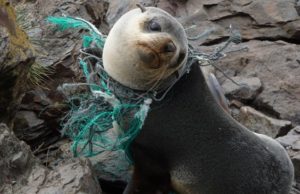 Every year, 8 million metric tons of plastic garbage from all over the world makes its way to oceans. Food wrappers, caps, cups, plates, bottles, bags, straws and other discarded items make up 90% of floating marine debris. Caught up in currents, this waste is accumulating in 5 giant garbage patches all around the world. The most known of them is the Great Pacific Garbage Patch located between North America and Japan, also known as the 7th continent. This zone alone is larger than the entire European Union to give an idea of the scale of the disaster. Plastic breaks down into smaller toxic fragments, which never fully degrade. 70% of the marine litter ends up on the seabed going unnoticed. However, with our beaches becoming fully dumping sites, we cannot deny the issue. This pollution has also a high financial cost since it represents a yearly amount of €11 billion in environmental damage to ecosystems.

Beyond that, marine creatures pay a heavy price with 1.5 million of them perishing annually. One in seven sea turtles species, over half marine mammals such as seals, dolphins or whales and almost two-thirds of all seabirds species have ingested noxious particles or become entangled in ropes; fishing lines, nets, plastic bags and other remains. The figure of 95% of the beached birds found dead with plastic in their stomachs speaks for itself. As for fur seals, 50,000 of them are estimated to die each year. At least two-thirds of the world’s fish stocks are ingesting plastic pieces, which then release potentially dangerous chemicals. Consequently, the food chain goes contaminated. To sum up, we are eating our own trash: “what goes in the ocean goes in you” as quoted in a campaign from the Surfrider Foundation. It is forecasted that by 2050, our oceans will have more plastic litter than fish. We are all responsible, so what are the solutions to save the oceans from turning into plastic soup?

We need to put down plastic, the annual output of which has risen from 1.7 million tons in 1950 to over 300 million today. One should consider alternative materials such as steel, glass or wood to gradually reduce its use. One of the simplest changes we can introduce in our daily life is to use cloth bags for shopping. Every minute, around 1 million of plastic bags are used globally. Although they may be recycled (which costs roughly €3,500 per ton), the best is not to use them at all. There are other ways to make a big difference. Instead of purchasing bottled water (around 75% of these bottles end up in landfills), one can install a water filter. Using glass jars instead of plastic food storage containers, reusable bottles and cups or composting to decrease garbage bags. In short, keep in mind the motto “Refuse, Reduce, Reuse, Repurpose, Recycle” and spread the word.

Let us do not forget that we cannot live without the oceans since most of the oxygen is generated by them. They regulate the climate and provide a home for nearly 80% of all living beings on earth. Nobody can deny that we are destroying them and we do have an obligation to take action. Otherwise, we condemn all humanity.

If you are willing to contribute, you can join a national clean-up day organized by the mass movement Let’s Do It ! World