Arriving to Participation Day I did not know exactly what to expect. It was my first time attending this event and surely not the last one. I was excited and highly motivated to absorb as much as I can. Many topics have been discussed during the day – we’ve got much scientific input from high profile experts. But the most valuable for me was an exchange with other participants. And this is what this report will be about.

Our climate is in danger and we all know about it, but nobody thinks that it is so near, here in Europe. All information an average person have ever heard is about small islands in ocean which will disappear due to the global warming. Danube region is in danger too and especially the Danube delta, the second largest river delta in Europe. The greater part of the Danube Delta lies in Romania, while its northern part is situated in Ukraine (Odessa Oblast). I met Michajlo Nesterenko from Rewilding Europe and Igor Studennikov from Centre for Regional Studies (CRS), both from Odessa. They opened my eyes on the situation there with their professional expertise and personal experience. I am very interested in climate and environment protection, I wrote my master thesis on international climate negotiations, that is why this topic gained my attention and place in this report.

Do you know there are rice fields in Europe? Where, will you ask? In Danube delta, in Odessa region. These fields were built in Soviet era, in 70s, when fertile land has been exploited. Back then rice from Odessa region was even exported, nowadays Ukrainian agriculture complex supplies 20-25% of needed amount, and the rest should be imported. However, climate changes endanger the existence of these fields. Last years there have been extreme changes in temperature, much rain and snowfalls, which all together led to changes in the soil, where water saturation marks up to 100%. All the rice fields are located lower than Danube floodland, which is why even visually unnoticeable for river level water rise is critical for those fields. The water has to be pumped up immediately, because 3 days of dead-water means complete reinoculation. 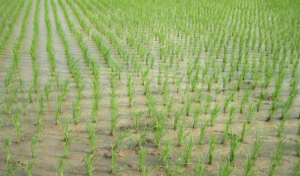 Unfortunately, not only rice fields are endangered by changing climate conditions, harvest of other cultures in Odessa regions has been damaged, too. Interesting fact, these changes have not affected the Northern part of Ukraine so dramatically, but the dependence of agricultural sector of Odessa region on Danube delta and Black Sea might be a reason why these changes are so significant.

At the end of Participation day all participants I talked to, mentioned, that more structure and more specific topic is needed for the upcoming year. My suggestion would be to talk about environmental changes in Danube region and what our participation can change. The NGO Mr. Nesterenko works for is researching environmental impact on agriculture and helps the farmers to adjust to these changes. Of course, the topic should be extended to other countries of region and other environmental problems, but still, paying attention to the environment of Danube region and participation for its preservation are essential for the sustainable development of the whole region.

Last, but not least, I want to thank FOSTER Europe Foundation, Ladder Project and Agapedia Foundation for possibility to be a part of Participation Day 2017 in Budapest!