Citizens in action: The story behind the FoodBank

Home/Irene Vivas Lalinde, Local Actions for Global Impact/Citizens in action: The story behind the FoodBank
Previous Next

Citizens in action: The story behind the FoodBank

Maastricht is located at the south-eastern area of The Netherlands, and is mainly known because of its University, charm and the fact it shares its name with a European Union Treaty. The city is full of life due to the thousands of students that live here and one of its distractions is the Friday market in which you can buy fresh vegetables and fruits. Unfortunately, as in any other market, hundreds of kilos of food are thrown away because they are not considered suitable for selling or just because there is a surplus. 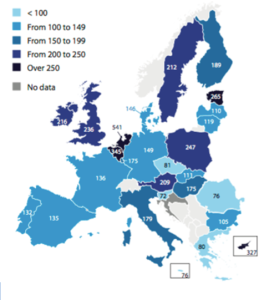 In Europe, per capita food waste by consumers is between 95 and 115 kgs per year. Luckily, countries such as France, by forcing supermarkets to donate eatable food before throwing it away, and citizens in general, are starting to do something about this issue. Denmark, despite the bad results of 2013, has reduced the squandering by 25 % thanks, among others, to activists and entrepreneurial initiatives in the country.

Some weeks ago, I was lucky to discover the Food Bank initiative. In its Facebook page it is described as a “non-profit initiative aiming for more sustainability by turning food “waste” into a beautiful vegan feast”. But, after talking to Rowan, one of the veterans of the Food Bank- and, recently, Philosophy graduate-  I realized that is much more than this.

People started to organize themselves three years ago in petit comité, just to distribute the surplus. But it was until 2014 when this bunch of enthusiasts started to cook in community and now, they can gather around 100 people in a magic place, surrounded by trees and bucolic spaces.

It is a beautiful feast because of the idea behind it; getting reunited after a long day at the university (you will most likely find students here but everyone is welcome) with a nice selection of music: from Buena Vista Social Club to more modern tunes. And vegan, for practical reasons and because of environmental implications of meat production.

“The Food Bank made me shift from vegetarianism into veganism” says Rowan, and not only it, as this utopia taught him a lot about food waste and how incredibly ignored this problem is.

There are three main sources of provision; private donations, leftovers of supermarkets and farms; which in the end means a lot of food. But still they need to buy some products such as oil or salt, so any support is welcome!

Another beautiful thing about it is the leading role you have; from cutting, washing, peeling at the beginning, to clean with your belly already filled! The strong sense of community is at the core of the idea and the soul of the Food Bank is well described by its three logos.

The Squats’ one (the space is lent by around 15 people living there), a Flower (as veganism is more of a lifestyle) and the Anarchist logo (they do not need anything but people to organize themselves and function).

“I want the Food Bank to stay as it is now”, states Rowan. Maybe the dilemma is here, how to mainstream a practice that you want to keep free of the limitations that may arise with regularization. However, good news are that each Friday you can still cook with strange people just to enjoy life while recycling food…waste (which is delicious, by the way). 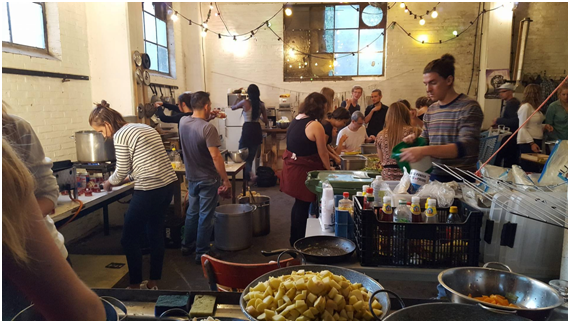