It was recently explained to me that the reason for the increase in rent prices in Malta over the past years is due to those ‘Klandestini-what-do-you-call-them-Refugees’, as they are sometimes referred to here.

Rent prices in Malta have increased quite significantly in the past years and the augmentation has now spread from the wealthier, popular hot spots to the cities and villages of the middle and lower-middle classes. I’ve been returning to Malta regularly for some time now and have witnessed this rather rapid change myself.

Although unemployment rates in Malta are relatively low, so are the wages. Individuals with migrant backgrounds, particularly those with ‘refugee’ status are often exploited or have limited opportunities to fair working conditions. This is not uncommon throughout the world particularly in places that have witnessed a flux in migration.

Sometimes family groups or collectives of individuals can only afford to share a mattress in a room amongst others in a 2 or 3 bedroom apartment. Unfortunately, some Maltese owners have taken advantage of the vulnerable status of these groups and have gradually demanded unreasonably high rent for very basic and crowded living conditions. That is apparently why it is the fault of the Klanditini-Refugees that rent prices have spiked… 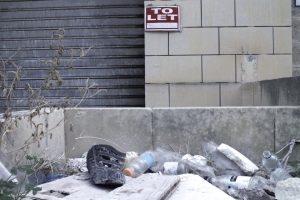 Obviously, the reason this argument is irrational and unfair is that the responsibility for the increase lies with the the property owners and their willingness to exploit people who are essentially vulnerable. Also there are multiple reasons to the rent rise and migration in its broader definition is certainly an influence of significance.

The largest represented non-Maltese foreign workers living in Malta are people from the United Kingdom and Italy. The largest non-EU group are from the Philippines. Other migration groups include peoples from Bulgaria, Luxembourg, as well as Somalia and Eritrea. Refugees or Sub-saharan nationals are not a majority migrant workers group.

The demand for accommodation has also grown due to socio-economic changes within the Maltese community itself. Younger generations with access to employment that would have in the past continued to live with their parents into their late 20’s are now being influenced by liberal trends and are leaving home sooner. Despite the relatively low wages however, the collective demand for living spaces has pushed up rent prices.

I am not sure how widespread the Klandestini Rent Spike theory is in Malta but it does reflect a misperception of some of the changing realities happening here. There is a great deal to be done to readdress and introduce narratives and images that reflect a truer perspective and encourage a willingness to confront the fears that are causing division and exploitation.