Bonn: US indecision and China and India’s new leadership in the field of energy production

Home/Chiara Soletti, Citizen Journalist - Climate & Energy/Bonn: US indecision and China and India’s new leadership in the field of energy production
Previous Next

Bonn: US indecision and China and India’s new leadership in the field of energy production

Two days after the end of the UNFCC intermediate negotiations held in Bonn, the debate continues with regard to the impact of the Trump Administration’s decisions with respect to the environment. From the very beginning of the negotiations, the United States have sent out signals that are not very encouraging, participating in the discussions with a delegation of only seven members. The fact in itself is particularly important given that China and India, which are among the countries chiefly responsible for greenhouse gas emissions, were represented in Bonn by a significant number of delegates, forty of whom were from China alone. 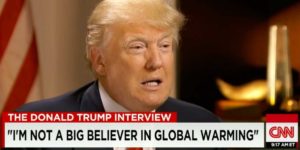 Consequently, the US delegation’s statement concerning its change of priorities with respect to the Obama administration did not come as a surprise. Currently, the main objective now is to reduce employment instability by creating new jobs, while for the Republicans the Paris Agreement represents a hindrance with respect to their promise of an economic boost made during the electoral campaign. Last January, with an executive order (White House 2017b) Trump inaugurated the America First Energy Plan (AFEP), in effect thereby replacing the Climate Action Plan” (CAP) of the previous administration.

“The highly adverse rollbacks of US climate policies by the Trump Administration, if fully implemented and not compensated by other actors, are projected to flatten US emissions instead of continuing on a downward trend”, said Prof. Niklas Höhne of the New Climate Institute.

However, there has not been a great delay in filling the vacuum in leadership in the struggle against climate change created by the United States. On the international scene, China and India are becoming increasingly distinguished by their commitment to disinvestment with respect to fossil-fuel energy sources. China has in fact seen a decline in its coal consumption for the third consecutive year and aims to further accelerate the reduction through the closure and conversion of its coal-fuel power plants (about one hundred were shut down over the last year). Albeit with a program that is not so clearly defined with respect to the Chinese plans, India is increasingly adopting resources in order to reduce its emissions. In December 2016, a new national energy plan was launched, providing for greater investment in renewable-energy resources and imposing a halt to the construction of new coal-fired power plants.

Until five years ago it was unthinkable that these two countries might plan to contend with growing energy requirements without resorting largely to fossil fuels. Today, however, renewable energies represent not only the solution to their energy needs, but an opportunity for economic development. Over the last 10 years, energy produced from renewable sources has become extremely competitive, and technological advancement has made energy production stations increasingly efficient. Moreover, a greater availability of low-cost energy has raised the demand for electric cars, a market in which China and India are now competing. Data relating to economic factors and emissions are so encouraging that, according to the  Climate Action Tracker, there is a possibility that both countries will exceed their level of commitment presented in the respective Nationally Determined Contributions (NDCs) aggregated with the Paris Agreement.

Meanwhile, the Trump Administration has been trying to relaunch the US mining industry, which has been stagnating for years, by removing the moratorium on mining licences on federal land. Nevertheless, the market does not appear to have shown any particular interest in this regard. It would appear to be symptomatic of the fact that today investing in sustainable energy technologies and sources is no longer merely the right choice, but also (and increasingly so) the most convenient decision in terms of future prospects.