The Hague Academy for local Governance is an NGO which organizes practical training to civil servants from developing and transitional countries. Discover the story of Hlompho , one training participant who works on fiscal decentralization in Lesotho, a particular country facing important social issues. 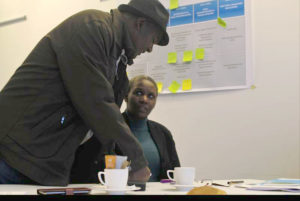 « I come from Lesotho, do you know where it is in Africa? » asks Hlompho Matsoso with her shinning white smile as I meet her in the Hague in the beginning of February. She assumes a young European girl such as me will probably not be able to locate her country on a map, nor manage to pronounce her name properly. She is right about the second assumption. And if I was (to her surprise) able to locate Lesotho on the map, it is true that I could barely tell anything else about the country.

So, to start: “Lesotho is located in Southern Africa. But it is not part of South Africa’’, she insists. Lesotho is about 30, 000 km2 large, for less than 2 million inhabitants in 2016. To compare, the Netherlands, with 41,543 km2, counts more than 17 million inhabitants. And if Lesotho must not be confounded with South Africa, the particular geographical situation of the two countries has caused unavoidable ties and migration movements between them.  To be clearer, ‘’Lesotho at one time had more of its workforce employed outside its borders than any other country’’, as stated on the website of the CIA (Central Intelligence Agency).

In Lesotho, Hlompho is working as a deputy general accountant in the treasury department of the Ministry of finances. One of her main priorities is to coordinate the fiscal decentralisation process in the country. An important challenge, even for Hlompho who holds an MBA, has strong experience within ministries in the country and who has worked in Canada and China.

With a score of 0.497 on the Human Development Index, Lesotho is ranked among the Least Developed Countries. It is still facing related socio-economic issues, including high rates of AIDS prevalence and child mortality. According to the CIA, more than half the country lives below the property line.

The geographical situation of Lesotho makes the task of Hlompho particularly complicated. First of all because as a landlocked country with little arable land, it relies economically heavily on neighbouring South Africa. Furthermore, Lesotho is a small country that is also very mountainous. It is divided in 10 districts, and some of them are very difficult to reach. And highly underdeveloped. ‘’Everything remains very centralized. Although fiscal decentralisation could really help the development of rural areas. The phase we are in now, is the very beginning of the process of fiscal decentralization.’’

The fiscal side of the decentralisation process

Lesotho already gave a try fiscal decentralization in 2005. Which was according to Hlompho … A big failure: ‘’we gave to the districts a grant to lead projects for the community like water supply, service pipes or schools for example. We wanted to see whether they would be able to manage. And only one passed!’’ The main problem according to this accounting expert is that the projects managers from developing districts were unable to keep records.

And in this regard, giving them grants they were unable to manage was a mistake: ‘’We need financial people. They have to be trained and become more conscious of the importance of standards that have been set by the EU, UNDP or UNCDF.’’

Determined to help her country going further in the process of decentralization, Hlompho has recently followed a training related to fiscal decentralisation in The Hague in February. Which is actually the reason I met her in the Netherlands. ‘’Having a course on the subject here in the Netherlands is very helpful for me. Even if no country does fiscal decentralization in a perfect way, hearing experiences from experts or foreign civil servants  is incredibly helpful’’, she explains.

And if Hlompho is being pretty critical over fiscal decentralization in her country, she is also proud of the progress Lesotho has made on the matters of local governance, as elections have been held recently for local governments. Furthermore, according to CIA, ‘’Lesotho has made good progress in education; it is on-track to achieve universal primary education and has one of the highest adult literacy rates in Africa.’’ We can conclude that if the country faces obvious shortcomings, positive change is also happening in some places. And actors such as Hlompho can give hope for a brighter future for the country.