On May 10, 11 and 12 2017, about 160 international stakeholders working on the strengthening of local democracy from all over the world gathered in Torun, Poland for the ‘’Ladder Tool Fair’’. Organized by ALDA in the framework of the LADDER project, the event aimed – as its name indicates –  to foster the exchange of tools and best practices between stakeholders. The fair also sought to discuss the challenges and possible solutions for local actors to engage citizens for sustainable development, poverty eradication, gender discrimination and climate change. In 2017, the European Commission highlighted the LADDER initiative as a European best-practice. 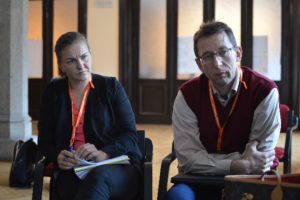 During a workshop focusing on best practices in development education and citizen inclusion experienced by participants (facilitated by Cecile Meijs – Director of ‘The Hague Academy for Local Governance*). Ihor Savchak, chairman and founder of the Centre for Cultural Management in L’viv, Ukraine caught a lot of attention from participants with the tool he shared, called ‘’Cultural Mapping’’. For this innovative leader, culture ‘’might be the sector that can the most effectively catalyze change’’. And his experience confirmed this idea, as it allowed him to involve efficiently citizens of the city of L’viv in the cultural development of their city.

Ihor (right), explaining the cultural mapping at the Fair

So what is this magic cultural mapping tool? If it is not widely used in Europe (yet) and was unknown to most of the stakeholders participating in the workshop, it is far from being new. It has namely already been used by Canada in the Creative Cities project. The Great White North then developed a Cultural Planning Toolkit that actually formed the basis for the cultural mapping in the city of L’viv.

In this toolkit, cultural mapping is defined as ‘’a process of inclusive community consultation and decision making that helps local governments identify cultural resources and think strategically about how these resources can help a community achieve its civic goals.’’ More simply put: a tool to give everyone a voice so that every actor is consulted and all resources are used in an efficient way to achieve cultural development. Cultural mapping is also seen as a way of looking at all aspects of a community’s cultural life as community assets.

The whole community of L’viv involved in Cultural Development

Ihor Savchak was the innovative team leader for the cultural mapping of the city of f L’viv in 2007-2008. “The goal of our mapping project was to engage the residents of L’viv in a community exercise that would define the current conditions of the city, its outstanding issues, and create a preliminary framework for future cultural policy development”, states Ihor. 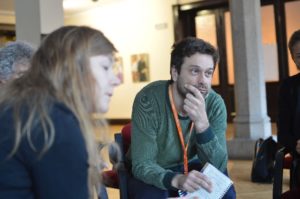 The main focus of the cultural mapping process were inclusivity and accessibility. Ihor and stakeholders involved in the project dedicated a lot of energy in building an interactive participant-driven setting in order to identify key players, critical points of action and abilities/opportunities for capacity building, strategic planning and organizational development within the city of L’viv.

Through events and questionnaires, they caused cross-sector participation and involved – besides cultural stakeholders –policy makers, media, intelligentsia, public personages, business leaders, religious leaders… Altogether, the very mixed crowd identified 2000 organizations and cultural initiatives in the city, that could potentially put efforts in developing the culture in the city. Their analysis concluded that two area were causing challenges for cultural development. The first one was resistance to change (causing corruption – rigidity – inflexibility – little interest in or awareness of the value of cooperation or in the concept of leadership as service). The second main challenge was the accessibility of information,  for both providers and culture consumers. Indeed, most of the citizens – even in the cultural sector – hadn’t a clear idea regarding what cultural activities were taking place in the city, and had no idea where they could find this information.

Next to the challenges, stakeholders also identified promising opportunities in the cultural heritage of the city. The

potential catalyzation of the cultural community, combined with good policy planning,  awareness raising for citizens and community leaders could eventually, according to Ihor “transform L’viv into a cultural capital such as Cracow and Prague”. And even if L’viv is not (yet) considered as a cultural capital in 2017, real accomplishments have been reached so far. In 2009, the City began publishing a monthly calendar of cultural activities (called OT-OT) in order to provide centralized access to information for the cultural consumer. And as cultural mapping is destined to be a continuing process, a lot of new initiatives were launched for the development of individuals and organizations, in order to build the capacity of the cultural community to do its work more effectively and efficiently.  The mapping process and programming resulted in the development of a growing network of cultural workers.

Even UNESCO  (in their Understanding Creative Industries Program) cites that cultural mapping, through the substantial awareness it generates and by fostering collaboration across a wide range of creative stakeholders has the potential to ‘’build momentum that can then influence the political sphere and encourage suitable public policy-making’’. They prioritized cultural mapping as a favored approach. The impact has been so positive in L’viv that the Cultural Toolkit has now also been implemented in six others cities in Ukraine.

Further, the success of the cultural mapping encouraged the development of a broader toolkit: the general community mapping for the city development, that is now widely used by Civil Society Organizations in Ukraine. Following the conflict in the country in 2014, the community mapping came from the ascertainment that cities and local communities were a low priority for many national and international stakeholders working in the area of civic reform and socio-economic development. It was also regarded as a way to encourage communities to remain in Ukraine, with the promise of opportunities. The process is very similar to that of cultural mapping as it strives to involve citizens in the development of their communities and can encourage people become powerful advocates for the transformation of the spaces in which they live. To conclude, as “Inclusion is about transforming the systems and structures existing in our societies in order to make it better for everyone” **, community mapping as well as cultural mapping seem to be relevant tools to share with everyone working on the Development Education and Awareness Raising (DEAR) goals prioritized by the European Commission, LADDER project and ALDA.

*THA is an NGO delivering training to foster better local governance in developing and transitional countries. Link to the website: https://thehagueacademy.com/