Global citizens: those that “You-Know-Who” should be afraid of

Home/Annamaria Lehoczky, Citizen Journalist - Climate & Energy/Global citizens: those that “You-Know-Who” should be afraid of
Previous Next

Global citizens: those that “You-Know-Who” should be afraid of

Partly-cloudy November morning welcomed me somewhere on a rooftop in the Marrakech medina. Routinely starting my day with a strong Moroccan mint tea and pancake with marmalade while trying to connect to the internet at my local Airbnb host. The Wi-Fi connection is coming and going all the time, and that morning it seemed to be even more lazy and moody. While sipping my tea and chatting over the daily program, finally the news started to hit my mobile, and blew my mind right away: Trump was elected.

As I arrived to the daily Climate Tracker meeting at the third day of COP22 Climate Summit (that took place in Marrakech from November 7 to 18, 2016), upset, confused and sad faces were reasoning one to another… how could such nightmare come true? The climate change denier Donald Trump took over the presidency, leaving millions with fear that the climate progress has been made in the last years would be washed away in an instant. We felt anxious not only because of the threatened environmental, climate, and social justice, but for the people of colour, undocumented immigrants, LGBTQ community, who would face more difficulties again, as if the trajectory of history would turn back.

However, after a couple of talks analysing the situation, collecting reasons over feelings, a different opinion hit my ears: “Life is not all about presidential election. We have been doing a lot so far, and we just continue.” – pointed out the young Argentinian environmental journalist, Tais Gadea Lara. She raised her voice for hope and persistence.

This voice started to echo in me since then, and made me question the overwhelming emotions that suddenly surrounded us: why are we so full of fear? Indeed, are we the ones who should be afraid?   I arrived a couple of days before the 22nd Conference of the Parties (COP22) started, to take part in the Conference of Youth (COY) that is usually organised right before the world leaders gather for the Climate Summit. The COP meets every year since 1995 in Berlin, to review the implementation of the United Nations Framework Convention on Climate Change (UNFCCC), and to discuss and synchronise the climate political strategies of the countries for the next year and farther. Besides the prestigious Climate Summit the COY is a buzzing event run by dynamic youth organisations of the host country of the COP to bring together young passionate global citizens from around the world to address climate change and promote sustainable lifestyles. 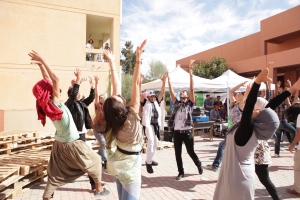 This year during the three-day COY more than 1800 people from 37 countries participated in workshops, exhibitions, creative events. What’s more, this time more than 500 young people aged under 18 were also present. Most of the participants were Moroccan youngsters from all around the country, that came to exchange experience, knowledge and good practices related to agriculture, water stress, sustainable transport, renewable energy and education. The 22-year-old Najah Amina believes that education is the key to improve the living of the people and tidy up the Moroccan streets. While she is talking about her plans – fluently in English, which is her 4th language already – her deep-brown eyes are brighten up. She studies Humanities at the Cadi Ayyad University in Marrakech, and eager to continue her studies abroad, to see the world and get back with all the knowledge to facilitate changes in her country. “We have a lot to teach to young people, like how to be conscious about the environment… and develop our country while keeping its traditions” – kindly offering some Moroccan typical sweets to taste – “There is no better than traditional homemade food”.

Amina is one of the dozens of bright and critical youngsters whom I was lucky to get to know during these days. They are those millennials who dare to question the status-quo and raise their voice for issues like social and environmental justice that they are concerned about. Even though the most of the Moroccans that I met haven’t been abroad so far, they have been raised to become global citizens via the internet that connects us anywhere, anytime. Through online platforms like-minded people can connect to each other 24/7, at almost any point of the globe. No borders to collective climate action. No borders to inspiration anymore.

That’s why I put myself the questions. Why are we so full of fear? Indeed, are we the ones who should be afraid? Is that true that with the Trump presidency the future is uncertain and dark?

I believe that not.

I believe that only one should be afraid: the one who has created the envision of fear. Maybe this unexpected milestone of history will function as a shock therapy. As Albert Einstein remarked: “Problems cannot be solved with the same mind-set that created them.” This shocking change might be a wake-up call to the global civil society to think again the citizens’ role, and find new alternative ways to articulate their opinion, and push their leaders to take responsible actions. This might be a revolutionary moment to transform our mind-set about our personal relation to politics and take real responsibilities for issues that matter to us. “Making changes requires commitment from everybody. Don’t underestimate our individual capacity to act to create a better world. The international community has a responsibility towards you” as Mrs Patricia Espinosa, Executive Secretary of the UNFCCC reinforced the global youth at the closing ceremony of COY.

The real power is in the hand of global citizens who can define a clear vision of a liveable planet and a just world. Only this world has a future. Anything else is just a one-night show.

Mrs Patricia Espinosa surrounded by participants of the COY at the closing ceremony (cop22.ma)