The story of Emilio: how volunteering changed his life from passion into action

Home/Irene Vivas Lalinde, Local Actions for Global Impact/The story of Emilio: how volunteering changed his life from passion into action
Previous Next

The story of Emilio: how volunteering changed his life from passion into action

When we face the toughest challenges of the society, it may seem that our small actions can hardly have great impact. However, this is not the case of Emilio Beladiez, a Spanish – young – vegan – social entrepreneur that will inspire our curious minds.

It could not be otherwise, I met him at the beach. My cousin had told me about this “cleaning mornings” in which he and other people collected garbage along the Valencian coast. Back in 2012, Emilio Beladiez and Daniel Miñarro founded an association: BIOagradables. First, it was just a social event that started as a reaction to the dirt of the sand and seawater which they had enjoyed so much during their childhoods. The third time they convoked it became public through Facebook and 35 people ended up cleaning the beach during a Sunday morning. Since then, Emilio has proven his commitment towards raising awareness on the environmental cause and having a sustainable attitude. He has participated in projects related to The Black Fish, Bioblau and, more recently, Ecologists in Action.

The combination of his passion for water and science led him to study Oceanography. As he defines it, his vindicate spirit was born slowly, as a process. He started participating in different initiatives to complement his university education and, as a result, he discovered his ability to adapt the scientific language to the general public. His power of communication, curiosity and willingness to change things have accompanied him in the last years.

Volunteering activities in the environmental field are not mainstream yet and Spain is far from its European neighbors, as shown in the EP infographic below: 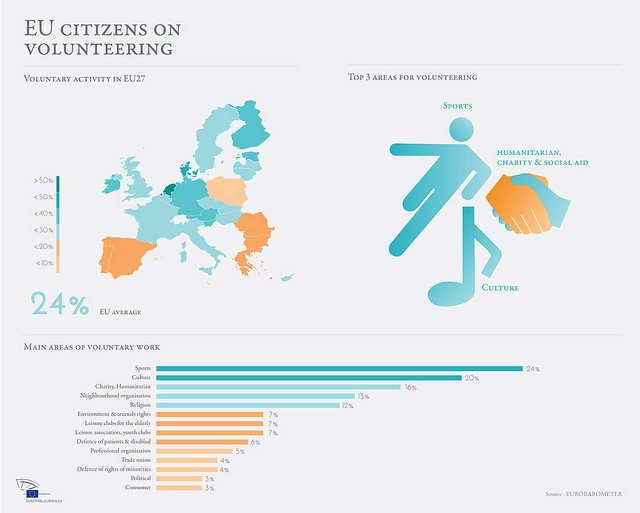 Unfortunately, there is not enough encouragement to voluntary service in Spain; the procedure to certify the hours dedicated for volunteering disregards social entrepreneurial initiatives – as certification must come from an external source-. Spain has a long way to walk and the European Union can be a good partner. Luckily, we can find good practices and greater support from Local Authorities and other Institutions in European countries. Projects such as Let’s do it world, which started from the passion of an Estonian woman, are now a global movement with massive participation, for instance.

Less commitment of our fellow citizens and less public/private financial support makes it arduous to a youngster like Emilio – who starts looking for financial stability – to be able to keep an organization like Biodegradables alive.

However, he remains positive and addresses his thoughts to the future. In October, Bioagradables has prepared an activity with Climate KIC aiming at using waste as cornerstone to make LED lights; in November, they will launch the US project “Our ocean” in Valencia. They are also preparing a project to print merchandising objects in 3D using shredded trash. Finally, through the “Proyecta Valencia” initiative, they will raise awareness on the Sustainable Development Goals (SDGs) and will get proposals from the civil society for the city of Valencia in 2030.

It seems that 2016 will be a fruitful year for Emilio and BIOagradables!

The story has also been published on The Ecosprinter website – check it out here!