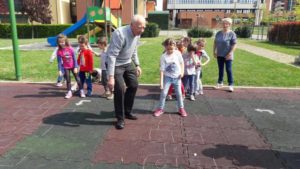 «My dissertation is born to a beautiful fairy tale: that of a little girl who grows up and learns from a grandfather how to draw the sea waves or how to raise a life, starting with a tomato plant»

Today we are speaking a lot about the question of inclusion: religious, cultural, ethnic, gender. In this article I would like to deepen another type of inclusion, that often gets neglected: the inter-generational inclusion. How are organized the relationship between different generation in every day life? Is there enough contact between the first and the last season of life?

For the last few decades Europe and Italy have been living a sort of demographic revolution as a consequence of work conditions, life standard, time organization changes. Nowadays it is becoming clear that we are going towards a society older and older. Let’s consider the Italian population: this year the longevity average is about 80,3 years for men and 84,9 for women, against a fertility rate (the number of children per woman) of 1,35. This means that in Italy there are more elderly people (over 65) than young people (0-14). The elderly population represents the 21,7%, a level deeply increased by the time, if we think that in 1983 the over 65 were the 13,1% of Italian population. This recent situation poses new questions about the third age role inside the society and the importance of the relationship between different generation. Despite this reality, European country still suffer from a widespread generational isolation and from a low contact between kids and aged people.

The idea is changing the traditional life organization of this two different “season of life” in order to connect them. Normally children spend the most of their time at school where they are organized in same ages groups and where they are mainly brought up by young or middle-aged women. On the other side, old people spend their time in recreational clubs or in the elderly residences or, even worse, they stay all day at home and the contacts with other people are reduced inside their family. In this way, these particular stages of life tend to be segregated inside closed areas with only few contacts.

The quote that opens these lines was written by an Italian friend in the introduction of her final dissertation, but it can be the description of most people childhood. Most of the time grandparents are one of the children life main characters, in a spontaneous and kind relationship which connects two worlds, apparently far apart but in that moment really and deeply united.

This connection has something to do with the project that I want to explain in this article, because it wants to deal with the children education, the elderly people inclusion and the possibility to imagine a new type of space, where young and old people share their life towards a mutual improvement beyond own family group.

In this direction, an attempt was started by a special structure near Padova, in the north of Italy: the Civitas Vitae. This complex of building, with a Catholic orientation, is organized in order to create spaces where children and old people are able to do recreational and educational activities together. In fact, in addition to a nursery and a nursing home, there are different service, all connected each other: from an oncological hospital to a museum of toy, from a gym for disabled people rehabilitation to a “pistodromo” (a particular street reproduction) where the old people teach to the young the road safety education.

In this structure the old person is not just a human being close to the end of is life, but a resource for the society and for the children education and he has to be safeguarded. Through the creation of these contexts of interaction, he can keep on living is life with fullness, develop relationships between people and generate benefits not only for himself but for the whole community.

A lot of studies show how this inter-generational education could produce grate results in the behaviour and the identity of children because the kids incorporate in a deeper way social and familiar values and they learn how to approach with the diversity and the fragilities of life. Moreover, the old people have psychophysical benefits because they can give affect, time and attention to the children. There is an antique tradition of inter-generational learning that represents the most important method of knowledge transmission between generations. In the past, old and young people used to meet each other in squares, in parks, in gardens and in the street, but now the opportunities of meeting are rarer. This idea of education wants to recover this habit not longer practised, in an innovative structure where school is the centre of the inter-generational exchange.

Of course, in spite of the large quantity of studies, there is still the necessity to deepen this experiment in an empirical way. Here, my proposal has been only to sketch this project with the hope that this kind of initiative, that now are exclusively private (and in Italy religiously oriented), could also be extended to the public and laical system, so that every one will be able to enjoy this particular inter-generational way.