They were some of the largest protests in Hungary since years. The streets have been filled with ten thousands of protesters marching against the close down of the renowned Central European University and against stigmatizing civil society organisations. People were protesting peacefully, but passionately. 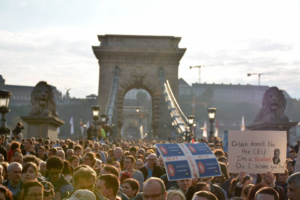 For the last few weeks, “lex CEU“ has been dominating the political discourse. It all started, when on March 28, 2017 the Hungarian government handed in a proposition of amendments in Hungarian higher education law, which (though not openly targeting the university itself) would make it impossible for the CEU to continue to exist as an institution of higher education in Budapest.

Budapest is a home to the CEU for the 25 years of its existence where it is deeply embedded in the academic life. Only assumptions can be made, as for what the real motivation behind the bill might have been, but some suspect it was purely for political reasons.

The CEU opposed the proposed changes in legislation, stating that it “targets CEU directly and is therefore discriminatory and unacceptable“. The event has been unfolding an ever growing wave of protests in the country, not only among the Hungarian public. Beside several Nobel laureates, other eminences such as the President of Harvard University, the British Ambassador in Hungary and German Chancellor Angela Merkel expressed (among other politicians from the US and European Union) their criticism on the changes undertaken by the Hungarian government. Even more surprisingly, right-winged party Jobbik joined the opposition’s protest. 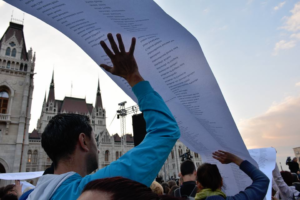 Only two days after the decision to adopt the law fell, again several ten thousands took to the streets, against another government policy, which aimed at intimidating civic groups receiving foreign funding.

As an illustration of how the protests were represented in the Hungarian media, specialist in data visualization Krisztina Szűcs took various screenshots of the leading online media portals and compared them. The result was striking: While it should be every journalist’s responsibility to report on the latest developments, it turned out that there was a high mismatch between the respective media portals, which could be mainly ascribed to their political orientation: In three of the six analyzed media portals, reporting on the protests took up a large amount of the screen, in one of them it even regularly covered roughly 80% of the surface. On the other hand, government owned media’s report was extremely scarce with often as little as one to three nondescript articles.

More striking than the discrepancy concerning the amount of articles published was the tone in which they reported about the events. Inspired by that, the author called her project “parallel reality“, pointing out how one and the same event is being reported on in sometimes contradictory ways. It is not only the situation of the media, which underpins the fact that parallel realities play a major role in everyday discourse in Hungary. The protests are in a way a materialization of a harsh line that seems to divide Hungarian society. Creating of enemy stereotypes is predominant on either side and is used as a tool by the current government in order to legitimate their decisions and respectively by the opposition to delegitimize them.

Nonetheless, we should come to realise that this is only the tip of the iceberg. The educational sector, medical care and other important areas are in a deep crisis. Meanwhile, there has been a new law proposed concerning secondary schools, which some see as the “real apocalypse“ in the Hungarian school system. It is part of a row of decisions, which have continuously led to a decline of higher education in Hungary. 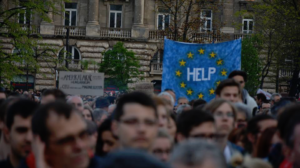 However powerful the protests might seem right now, it will really be the parliamentary elections in spring next year, where the Hungarian citizens can decide about their homeland’s future. Most crucial of all will probably be whether the Hungarian society will be able to bring the existing parallel realities closer to each other.