Where should the birds fly after the last sky?

Home/Annamaria Lehoczky, Citizen Journalist - Climate & Energy/Where should the birds fly after the last sky?
Previous Next

Where should the birds fly after the last sky?

The icy wind was blowing insistently through the narrow valley of Kresna, surrounded by the steep slopes of the Gorge. The landscape seemed suspiciously tranquil, hiding the story of a 20-year battle. Kresna Gorge, the gorgeous natural conservation area in Bulgaria, providing home for eagles, turtles, butterflies and more, is threatened by an international highway construction.

Friendly but prying eyes are following us walking across the tiny village of Kresna, as we are looking for locals who have heard about the construction plans of a motorway, supposedly built right next to their village. The welcoming vendors of the Friday market did not know much about the plans, and neither were truly involved in the decision-making. A small clothes shop owner expressed her very trust in the government that “will take the right decision on this controversial issue”. Others believed that the local and national environmentalist groups are the responsible to convince the authorities of a favourable decision on the case.

Taking a decision over wildlife seemed to be easy far too long, as no oak, neither elm, nor lizard would march to the Town Hall demonstrating for their rights. The affected people who are not aware of the different dimensions of a complex environmental-economical issue and the short and long-term consequences of a strategic decision, seem to be simply as voiceless as the wildlife.

When it comes to resolving complex issues involving several stakeholders in different administrative levels, a decision could take years or even decades. The story of Kresna is sadly not a unique example when political and business interests threaten wildlife and the well-being of people. In many Eastern-European countries decision-making is still far from transparent, that should be the principle of an accountable government. Let me illustrate the obscure labyrinth of bureaucracy through the 20-year battle over the Struma-highway in Kresna Gorge. 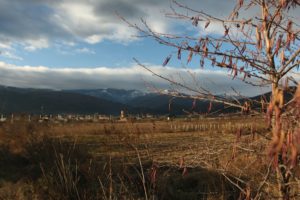 The vineyards nearby Kresna, the highway is planned to cross here

Kresna, a refugee of high biodiversity

The Kresna valley is a natural bio-corridor for local animal movements and seasonal migrations, in the transition zone of the mediterranean and continental climates. Even though it only covers an area equal to 20 football fields (14 000 ha), it is the richest biodiversity region in Bulgaria, with a great plant diversity including 21 endemic species (plants that only can be found there) and around 3300 species of animals (one tenth of Bulgaria’s faunal biodiversity). The area is part of the NATURA 2000 Sites, the European environmental conservation network.

Why biodiversity is important for us? The concept of biodiversity refers to the variety and variability of life on Earth. Healthy ecosystems (communities of living organisms in conjunction with their environment) are the fundamentals of human well-being. Ecosystems purify the air so we can breathe, cycle nutrients so we have access to clean drinking water without costly infrastructure, pollinate our crops so we have food, and sequester carbon for climate regulation. They provide us all the necessities to our survival. A 2014 study estimated the combined benefits of nature to people at well over 100 USD trillion per year. The top 50 most profitable companies globally combine to make just under 10 USD trillion per year – just for the sake of comparison. 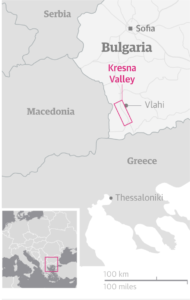 Kresna Gorge is a bottleneck, indeed, in various ways. The valley has been vital for centuries not only to animals but to tourism, trade and transport as well. An existing through road follows a onetime Roman path, that was decided to be turned into a highway leading from Sofia to the Greek border (Struma highway), as part of an important international route from Hamburg to Thessaloniki – funded by the European Union. The motorway’s route has been controversial since it was first proposed in 1997. In the next years, alternative routing plans had been discussed that would pass outside the Gorge. Finally, a route including a 13-km tunnel across the mountains was supported by local people, the Bern Convention Standing Committee (the Bern Convention is a binding international legal instrument to protect natural heritage) and the environmental impact assessment carried out in 2008. Despite all the negotiations, the Bulgarian government started to build the motorway towards the Gorge, from the north and from the south, like pliers. Meanwhile, the construction of the main tunnel was postponed until after 2014, and a new environmental impact assessment was initiated.

Concerns were arisen about the tunnel such as the tunnelling poses environmental danger due to earthquake risk, high levels of underground uranium, soil disposal issues and the depletion of water tables. However, only one environmental impact assessment is publicly available, and officials privately admit that these papers contains errors and so the results might be misinterpreted by authorities in disfavour of the tunnel-building plan. Besides the local municipality, the Bulgarian Chamber of Construction Companies (BCC) also support the anti-tunnel campaigning. According to the environmentalists, the BCC is one of the most powerful stakeholder in the negotiations that is only interested in pushing their favoured route of motorway through the Gorge. The municipality’s main concerns about the tunnel is its safety. The already existing road has a high rate of deathly accidents, and according to the mayor the tunnel would further raise this rate. 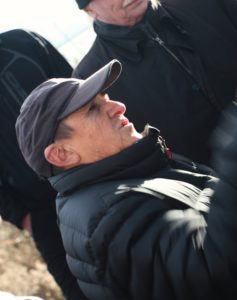 Environmental experts argue that besides devastating the environmentally protected habitats, the planned highway would increase the threat of landslides, disturb animals with the upheaval of industrial construction, and involve chopping down trees which line the Struma river, causing soil erosion and flooding. Locals would be also affected by the increased air and noise pollution along the highway. Moreover, as a case study by NGOs Balkani, Tetida, and the Bulgarian Herpetological Society showed, there is a large number of roadkills, especially in the summer season, when the animals are more active and there is high traffic due to the high tourism season. Bat victims were found as numerous as birds at daytime despite the lower traffic intensity at night. As Boyan Petrov, a zoologist at the Bulgarian National Museum of Natural History, explained there are unique populations of 18 bat species in Kresna, and most of them cannot be found anywhere else in the world.

Kresna Gorge is a battleground for already two decades. Although local NGOs proposed route variants outside of the Gorge – avoiding inhabited areas, arable lands, the most precious natural habitats and biological corridors, as well as the mineral springs in the region –, other interests have been stronger. The European Commission keeps silence regarding the case since 2014, when it officially stated that “all alternatives should be studied”. In September 2016, a new alternative was announced by the road authorities: half of the traffic to be left on the existing road and half led to a new eastern bypass (near to the NGO proposal of 2002). A new impact assessment is planned to be launched in February 2017, but this evaluation study does not include the variant of both bypass out of the Gorge. 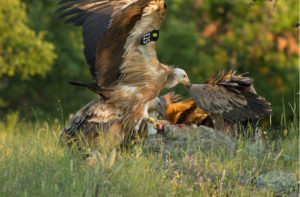 To avoid more animal casualties environmental experts insistently argue for the redirection of the high transit traffic outside the gorge. Along the already existing road they recommend mitigation measures for wildlife movements such as to lower the slope of steep road verge, to build additional underpasses and overpasses – usual practice throughout Europe –, as well as to construct guidance facilities along the edge of the road.

The story of Kresna Gorge cries out for transparency. Transparent decision-making is vital in a well-functioning democracy, providing that the power-sharing process is properly executed. Participative democracy, built on transparency and everyday participation, has been used officially in northern Europe for decades. Official documentations about Kresna Gorge including the environmental impact assessments should be made publicly available urgently. Furthermore, public participation should be encouraged in decisions that has a high impact on the everyday life of locals and the natural heritage. Averting a dramatic decay of biodiversity is still possible, but the window of opportunity is rapidly closing.

“Where should the birds fly after the last sky?” – quotation from the poem “The Earth is Closing on Us” by Mahmoud Darwish