Leadership: From woman to woman

Leadership: From woman to woman

Amongst the UN’s 17 Sustainable Development Goals, is a goal concerning Gender Equality. For each goal an influential person from somewhere around the world hoisted a flag. For goal number 5, Gender Equality, the flag was hoisted by the Danish Crown Princess Mary. 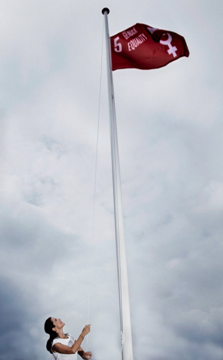 In some ways the goal is pretty specific; equality between genders. But in reality, it is a pretty broad statement. Fortunately the UN has specified several point that they will work on improving. One of these ‘sub points’ is to “Ensure women’s full and effective participation and equal opportunities for leadership at all levels of decision-making in political, economic and public life.”.

During the last 20 years, the numbers of women in national parliaments have almost doubled. But still; women only make up around 22% of all parliamentarians in the world. So how do we work towards raising that number? How do ensure that the playing field is even and that women have equal opportunity to participate in decision-making and being in leadership positions?

A non-profit organization called Empower Peace has its main headquarters in Boston, Massachusetts. It is also in this city that Empower Peace holds an annual women’s leadership conference. The conference is called Women2Women (W2W) and was founded by Rick Rendon in 2003. The conference stretches over 10 days and has 100 delegates from over 26 different countries and 5 different continents participate.The main goal of the conference is to help these women, aged 15-19, develop their own personal leadership skills. Along with countless workshops, the delegates are also introduced to several influential female leaders. These female leaders, whether they are in politics, science or art, hold lectures for the delegates. They tell amazing tales of their way to the top, and they utterly destroy the misconception that women cannot be as great leaders as men can.

The conference also place emphasis on building invaluable skills for leaders; networking, critical thinking, the art of negotiation and so on. This year, the conference took place from the 21st of July to the 30th of July. The conference schedule is extremely packed, but there is also time for sightseeing and having fun. But the main purpose of the conference, besides developing leadership skills, is for each of the delegates to develop Action Plans. The delegates are supposed to find an aspect of the society in their home countries that they want to change or improve. Then they have to develop an action plan over how they are going to improve it. So when the delegates go back home, they have a solid plan of action concerning what they want to change. This year, the action plans varied hugely; from de-stigmatizing homosexuality in Poland to changing marital laws in Bahrain.

Although the conference itself isn’t enough to secure complete gender equality, it is definitely a step in the right direction. And who knows, with the right action plan individual women can change the world.