So similar, yet so different

So similar, yet so different 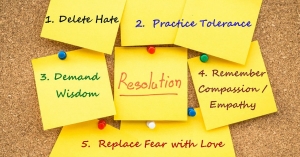 Today, the world marks International Day of Tolerance. The day when we remind each other how important it is to accept other people’s opinions, feelings or beliefs- things we seem to forget about lately.

On November 16th, 1996, UNESCO launched the International Day of Tolerance, stating that “Tolerance is respect, acceptance and appreciation of diversity of our world’s cultures, our form of expression and a way of being human. Tolerance is harmony in diversity. This is not only a moral duty, it is a political and legal requirement. Tolerance is a virtue that makes peace possible and contributes in changing the culture of war into culture of peace.”

No human being in the world is the same, we could say that people see tolerance as a part of our existence- because tolerance is not only a mere appreciation of other races, nations, religions, but the way that each of us increases personal development. By sneering, teasing or pointing out other person’s diversity, we only show our ignorance- because something that is not seen “normal” to an individual, does not necessarily mean everyone thinks so. Learning and appreciation of one’s differences teaches us about things we don’t know enough to construct an opinion and also enrichens our knowledge.

In times when barbed wires are surrounding borders, when people are expelled from their homes due to someone else’s principles, when the smallest diversity is judged from very early age, when various gatherings are bombed, tolerance is needed more than ever. Is now not time to change that? Because tolerance stands for being free, for firmly sticking to one’s beliefs and yet respecting and accepting other people’s opinions and differences.

You can read the article in Croatian here.