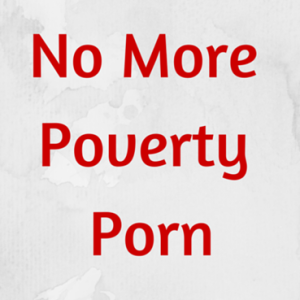 Poverty is a result of both individual and systemic problems, involving not only personal circumstances but the social and justice systems in place that either work to empower the poor or perpetuate their condition.

This kind of giving has the potential to make significant impacts once in the hands of organizations that address poverty in a sustainable way. However, it perpetuates dangerous ideologies along the way that do more harm than good. It tells the poor that they are helpless beneficiaries and it tells financially secure donors that they are the saviors. In this dynamic, donors are told that they are the only ones with the ability to make a difference. Nothing is said about what it would look like to empower the poor and walk alongside them to help them realize their inherent ability to be the change agents in their own communities.

George writes, “In such images, poverty is dirt and rags and helplessness.” In reality, poverty has “many faces” and no simple solution. Poverty doesn’t only look like a starving child with flies on his face. In fact, poverty doesn’t look any particular way. It is multi-faceted and should be depicted as such. Reporter Tom Murphy writes, “Suffering is a part of poverty, as is good news, as is a family sitting down for a meal.”

Poverty is holistic, affecting the whole person and not just what is seen.

Showing children and moms in a very bad look, but intentionally searching for that in order to impress and raise awareness it’s really damaging and gives not an accurate image of the situation. In addition, encourage and enforce stereotypes about certain parts of the world and about people.

In order to raise funds about different humanitarian causes there can be a different approach with focus on campaigns that respect  human rights and the people’s dignity, where the context is very clear presented and the protagonists can speak for themselves.