Let’s Shape the World’s Perceptions Through Words; With Words, We Govern World

Let’s Shape the World’s Perceptions Through Words; With Words, We Govern World 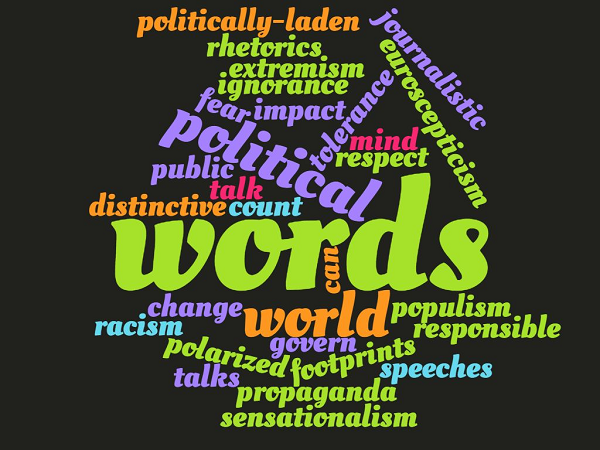 Words are immensely powerful. Its power has been proven time and time again and old bald history can attest to that.

They can bleed, cut or even destroy a nation. They can shape, influence or alter our perceptions of truth and reality. They can serve as a vehicle of lies and instrument of propaganda to advance political interest or ideologies. Why people in Europe, America and other parts of the globe are faced with the seemingly inevitable crises on a distorted perception of reality is due mainly to various elements which tap the use of language as a tool to influence public opinion, shape social perceptions and impact decisions in various aspects of our lives, whether in the area of politics, culture and the society.

There are a number of factors that are at play in our society that directly or indirectly exert impact on our thoughts, rationality and most importantly our emotions—tendencies to believe in conspiracy theory, propensity to believe polarized talk show or programs, absorption to political rhetorics of the day, and frequent exposure to social media. These factors essentially affect our perceptions of reality on issues affecting our society such as racism, eurosceptisism, populism and other similar issues. Allow me to break down concisely how these factors affect our perception of reality.

Conspiracy theories affect our perception of reality since they provide an explanation not available to the public by some means either because it is being withheld from the public eye or that the information lacks some coherence which eventually opens the issue to more speculations. It is from these instincts of fear and assumption that conspiracy theories resonate to the public since people are inclined to believe that which are intentionally hidden from public knowledge. Even in the absence of reasonable and justifiable foundations, conspiracy theories can gain ground and inevitably occupy space to human thoughts and may perpetuate negative, positive or neutral perceptions depending on who perceives them. Most often, conspiracy theories, particularly those which were drawn from purely wild figments of imagination serve as delusional luxury of the dissatisfied political conspiracy theorists, so to say.

Polarized TV programs and talk shows as well as political rhetorics are contributory and thus aggravate the existing negatively skewed opinion on a number of issues that affect universal respect and understanding. The credo “what you see and hear  is what you get,” seems to be at work in this crucial time when fear and distrust lock their horns again. The impact is far greater when the person who is conveying the message is a celebrity or a public figure. We are bounded by what we have access to. Our bounded rationality limits our perception of reality on what we knew and experienced. Our definition of reality is strictly within the bounds of our own knowledge and experience, past and present. When and if these limited intellect of ours is penetrated by polarized talks, we sometimes take it with a grain of truth, which is inevitable since we no longer bother to ascertain the truthfulness or falsity of these information. Drowned in a massive ocean of information in almost daily basis, we passively perceive as truth whatever is served as in the morning paper, news bits from the radio and tidbits from social media. Lamentably, we have become lazy creatures in search of what is really true despite some glaring half-truths.

Finally, the rise of social media has all the more facilitated the exchange of information that can potentially alter our perception of reality. With just a click of the mouse, even a half-witted person who knows little or nothing about existing issues about racism or extremism can be tremendously influenced of his or her perception of the truth because of irresponsible comments and remarks in facebook, twitter and other social media platforms. For some known or unknown reasons, some people are inclined to depend more on these platforms for news than in television or radio. The globe has been reduced into a tiny interactive community through the internet.

All these foregoing vehicles or forces tend to affect our innermost affective and rational processes that eventually influence our frame of mind towards tolerance, acceptance and respect. Common knowledge as it may appear, the lack of respect and tolerance to other people’s culture, beliefs and religious orientations can be counterproductive to global understanding and can be an anathema to recognition of the universally-accepted principles of human rights. Sometimes the solution to solving this concern on tolerance and respect is just at the tip of our tongue. The responsible use of public language, the proper use of social media and the accurate political representation of the issues can greatly alter a biased perception of a great number of us who, in a way or another, are not aware of the subconscious context and implications of language use.

Words count. You can choose to use it for the betterment of humankind. In parting, it is a blissful mirth to indulge from these wise words from Ernest Agyemang Yeboah: