Economic transformation from centrally planned to market economy in Central and Eastern Europe was one of the most important processes of the end of XX and the beginning of XXI century. Some countries succeeded in reforming their economies, others didn’t. There are many explanations why it happened. One of them is inclination to entrepreneurship.

The countries which were transforming their economies from centrally planned into free market economy form a very diversified group. Some of them did it successfully, others unfortunately didn’t.

One of the examples where transformation turned out to be relatively successful is Poland. It’s thanks to significant inclination to entrepreneurship in Polish society. Let’s have a look at some data confirming this thesis. In Poland in 1989 there were four private shops for every 1000 people but three years later the number increased to 9.3 whereas for example in Russia the index changed only from 2 to 2.5. Within only these three years the share of private shops in the market increased from 29% to 96%. In 1991 in Poland there were already 1.5 mln private firms and companies. Within the first four years of transformation over 1.2 mln new private companies and firms were created in Poland.
In Czechoslovakia the situation was similar: in 1991 over 90% of employees worked in private sector. In Hungary, in turn, between 1988 and 1993 Hungarians opened about 660 thousand new private companies. According to accessible databases, in the countries where transformation process was the most successful, the development of the private sector was the most rapid.

There are several factors which contribute to slower or faster development of private sector. On one hand these are institutional factors, on the other hand there are psychological factors. Let’s pay attention to the second group of them.

According to the World Values Survey database Polish, Czech and Hungarian citizens have a feeling of the strongest control over their lives. Ukrainian and Bulgarian societies have on the other hand the weakest control. This feature highly correlates with entrepreneurship.

Similarly effect has the feeling of motivation to achieve success. It’s the biggest in Poland and Hungary and the lowest in Ukraine. Polish and Hungarian citizens also perceive changes as a chance for the future, whereas in Bulgaria in Ukraine changes are rather perceived as a threat.

Those and other features correlate with eagerness to create companies, which is in turn highly correlated with the pace of GDP growth. This was the highest in Poland, Czech Republic and Ukraine and the lowest in Ukraine and Bulgaria.

To prove, what we said, let’s pay attention to Table nr 1

As we can see, those countries where we were able to observe more significant inclination to entrepreneurship are now much better developed (e.g Poland, Czech Rep.) than others (e.g. Bulgaria, Ukraine).

As we can see in the table above, Poland, Czech Republic and Hungary are the countries with the fastest growth in life expectancy. In Ukraine, this index hasn’t changed for 15 years! The results correlate with GDP growth and consequently with inclination to entrepreneurship

And the third table: 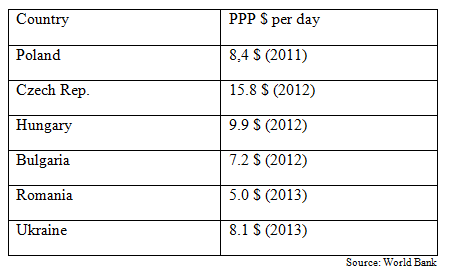 As we can notice, the poorest 40% of citizens have higher spendings in the countries with bigger inclination to entrepreneurship and faster GDP growth.

To sum up, we can say, that entrepreneurship is an indispensable factor in these countries, which still require transformation. However appropriate regulations supporting entrepreneurship must also be introduced. This problem will be discussed in another article.